Nordicomics Islands residence artists have been selected! The decisions were first announced at the Altcom festival in Malmö 10th Nov. From over 40 applicants, the Finnish Comics Society chose the following five artists for the four residencies:

Reykjavik, Iceland: Josefin Svenske (SWE)
Svenske will work on a personal story about her own family history and document her stay in Reykjavik through a comics diary.

Nuuk, Greenland: Mari Ahokoivu (FIN) & Søren Mosdal (DEN)
During residency Ahokoivu will research and work on a graphic novel that involves Nordic folklore about bears and nature while Mosdal focuses on his new graphic novel ‘Nastrand’ that explores the viking Thorkell Farserk’s life after his death in Greenland.

Tórshavn, the Faroe Islands: Eeva Meltio (FIN)
Meltio will work on a comics short story about the tradition of pilot whale hunting in the Faroese Islands.

Mariehamn, Åland: Linus Strandberg (SWE)
Strandberg will work on his autobiographical graphic novel ‘Kumlinge’ that focuses on his childhood experiences of growing up in the Åland archipelago.

The first three artists to participate in CUNE Comics-in-Residence programme were selected from 60 applications by the residence coordinators of Helsinki, Riga and Tallinn. The decisions were announced in Tallinn 17th Nov at the Koomiksipäev event.

Helsinki, Finland: Kristel Maamägi (EST)
Maamägi’s project will be a story about her grandmother and how it is possible to face life’s everyday challenges in one’s own creative way, and how not being an artist does not necessarily mean having to live an artless life.

Riga, Latvia: James Turek (GER/USA)
Turek will embark on a series of open workshops to places known or unknown in and around Riga. The sessions’s aim is to draw in places and to interact with people one normally does not, and to bring a sense of adventure and fun to making comics.

Tallinn, Estonia: Tommy A (NED)
In his project, Tommy will explore the gap between comics and high art and its complexity in an essay drawn as a comic, using the language of the medium to fully illustrate the unique aspects of comics. Comics Center Helsinki goes St. Petersburg this November! The center will be open in 17.–22.11 at the Sergei Kuryokhin Center on Vasily Island. There will be several courses, workshops, exhibitions and animation screenings during the week. An anthology with comics about the city will be compiled afterwards. 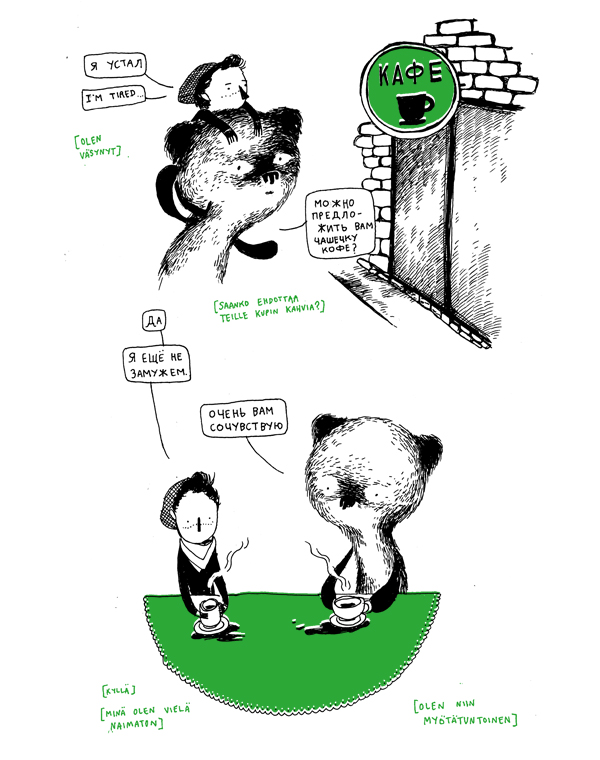 PARTICIPATE IN A BOOK!

During Pop-Up Comics Center in St.Peterburg, many new comics will be born! Some comics will be created during the week, some are going to merely see the light as vague ideas for new stories.

From all the comics related to this visit we are going to edit and publish a collective anthology book. The link throughout the stories is St.Petersburg itself and life in the city. Foreign visitors of course see the city through travellers’ eyes, while its own habitants live and breath the city life daily.

If you want to offer your story to be published, you can bring it to us on location in November or send it by email ( pop-up-piter@sarjakuvakeskus.fi and remember 300 dpi resolution!). The deadline is until the end of this year, so even if you only get started now, you can finish your work in good time.

There is also a competition for early birds, check the instructions here: http://sarjakuvakeskus.fi/pop-up-piter In 2011–2012 Nordicomics organised a Baltic tour that started from Tallinn and travelled through Riga to Vilnus, making also a detour in Hungary at the 8th International Comics Festival of Budapest in May. Finally in September 2012, the Baltic exhibition will be part of the Helsinki Comic Festival showcasing contemporary comics from the Northern and Baltic countries.

Nordic comics cultures have many similar traits. The field of comics is lively, active and international in all Northern countries and new artists and publishers are constantly emerging. However the artists still often remain unknown outside their own countries. Nordicomics gives these artists a possibility to showcase their artwork and network across the borders. Nordicomics Baltic Tour ended in Lithuania last week. In this last workshop the participants created comics naturally about Vilnius. The theme inspired stories about such diverse subjects as the local unusual celebrities and dreams of becoming a Lithuanian lottery winner.

Comics Center Helsinki presents comics originals from the workshop. The exhibition will be open all June. Artists featured include Egle Vitkute and Egle Shaltmira from Lithuania, Ingrida Picukane and Martins Zutis from Latvia and Maura Manninen from Finland.

The Vilnius workshop was a collaboration with Kitokia Grafika and was funded by Nordic Culture Point.

The seminar is free of charge. OCX comics festival in Oslo, Norway 27.-28. May 2011
Festival is at Schous plass, Grünerløkka, in downtown Oslo.